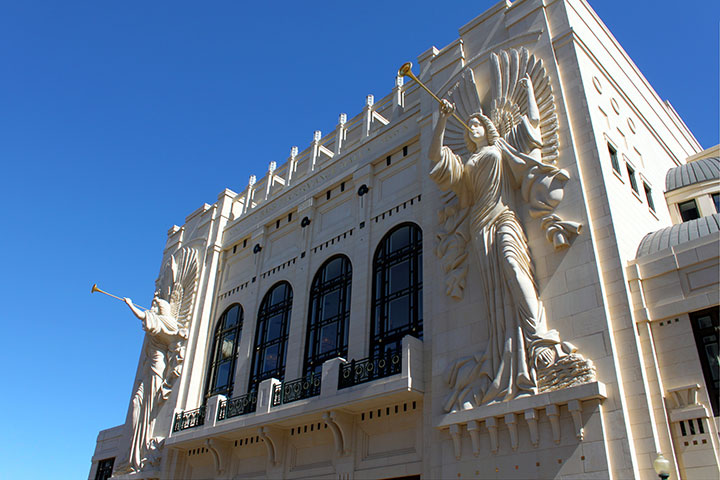 Following the Fifth Quadrennial Van Cliburn International Piano Competition, it was recognized that existing performing arts venues in Fort Worth had severe acoustical and logistical deficiencies. In an effort to correct this situation, a study was conducted for updating the city-owned Will Rogers Memorial Center Auditorium. It was discovered that renovation was neither practical nor suitable, and plans were shelved.

In the early 1980's the feasibility of building a performing arts complex in downtown Fort Worth was studied. This research produced useful information, but the program and construction costs envisioned at that time were judged to exceed available resources and, it too was put aside.

In 1989-90, a Cultural District Committee was formed with broad community representation to explore the adaptation or replacement of the Will Rogers Memorial Center Auditorium for a performance hall. An excellent plan was developed for a new hall incorporating the historic Auditorium façade. A complete architectural program was formulated, and an outstanding team of consultants was engaged through this effort. Unfortunately, due to a severe local economic downturn, voters did not approve the city bond issue that was to provide the public portion of the funding for this project. Nonetheless, recognition of the urgent need for a hall and support for a project of some configuration remained strong.

The Cultural District Committee’s consensus-building among major performing arts groups and major elements of the community, as well as the selection of a highly qualified and experienced consulting team and excellent preliminary design work, would have become stale and of no benefit except for Mr. Edward P. Bass’ interest in determining the feasibility of applying this critical work to a downtown performance hall site.

In 1992, a feasibility study was successfully accomplished resulting in the formation of Performing Arts Fort Worth, Inc., the nonprofit organization formed to fund, design and operate a world class, 2,056 seat, multi-purpose hall. It was determined the Hall’s mission was to serve as a permanent home to the city’s major performing arts organizations and as a premiere venue for other attractions so as to enhance the range, quality, and accessibility of cultural fare available to the public; to promulgate arts education; and to contribute to the cultural life of Fort Worth, Tarrant County, and the region.

In March 1993, a $60 million Capital Campaign, under the leadership of Bayard H. Friedman, began. Two years later, the General Campaign was launched and in April 1995, ground for the exciting new performance venue was broken. In June 1996, a $50,000 grant from the Junior League of Fort Worth was received to create the Children’s Education Program for Fort Worth public and private schools.

The Nancy Lee and Perry R. Bass Performance Hall opened on the corner of Fourth and Calhoun streets in May 1998, with a six-week Grand Opening Festival featuring the resident companies:  the Fort Worth Symphony Orchestra, the Texas Ballet Theater, the Van Cliburn International Piano Competition, and the Fort Worth Opera. The first performance of the Hall’s Children’s Education Program took place in September 1998.

Two years later, in April 2000, PAFW announced the “Operations Final Stages” Campaign, which was to raise $5.8 million for the completion of the Hall’s rehearsal and multi-use facilities. In May 2001, the Maddox-Muse Center, housing the Van Cliburn Recital Hall and McDavid Studio, was finished in time for full use of the Eleventh Van Cliburn International Piano Competition. In May 2008, Bass Performance Hall celebrated its 10th anniversary.